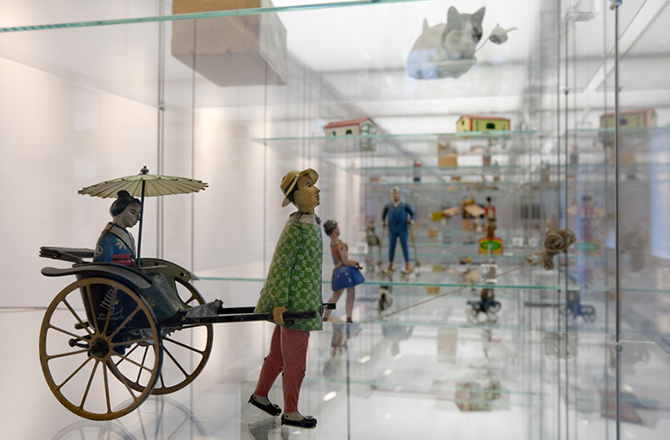 In 2006 Pietro Catelli added a precious series of pieces to the Museum collection: 41 silkscreened tin toys made at the turn of the century by the LEHMANN Company. These are small masterpieces born from the genius and imagination of Ernst Paul Lehmann, the founder of Europe's most successful tin toy factories. Colourful, witty, easy to handle and light, they are still in perfect working conditions thanks to their springs .

Lehmann's toys were very successful because they revealed the world of grown-ups to children. Ernest Paul Lehmann transformed whatever he saw in everyday life into a toy, testifying to the marvels of his times:  new means of transportation, the unusual figures of Buffalo Bill's show, wild animals and the Far East. CONTINUED

In 1889 Ernst Paul Lehman designed and manufactured his first toys. In Brandenburg he converted his tin can factory into a large toy industry. At his death in 1934, his grandson Johannes Richter continued the production of tin toys moving the factory to Nuremberg where it specialised in model trains. In 2006 Wolfgang Richter, fourth generation of the Lehmann Company, ended the production of toys and in that same year Pietro Catelli purchased and donated the historical Lehmann collection to the Museum. On the occasion, Wolfgang Richter wrote a letter to the founder of the Artsana Group saying

“the magic of toys continues to live on even in the days of computers and space stations. For this reason, the Toy Horse Museum is a declaration of love for the wonderful, lively and evolving world of toys. Rich or poor, the first thing a child owns is a toy, wherever he or she lives in the world. Perhaps the only true human beings are those adults who succeed in remaining children.”