This toy takes inspiration from the famous acrobat Jean-François Gravelet who became famous all over the world as Charles Blondin in 1859 for having crossed the Niagara Falls on a 334-metre-long tightrope. Thirty years after this extraordinary feat, Ernst Paul Lehmann dedicated one of his first toys to the acrobat: a 16-cm-tall ballerina who walks on a tightrope with great elegance and concentration. It features an ingenious rocking system that makes her walk in midair as she puts one foot carefully in front of the other not to fall. A change of gender was needed for the acrobat to hide the mechanism. So a little blue dress transformed Charles Blondin into Miss Blondin. The name appears on one side of the counterweight, while the other shows the old Lehmann brand. It is one of the few toys by Lehmann not to have been given a serial number starting with "EPL". 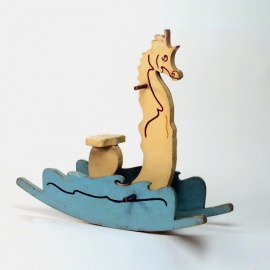 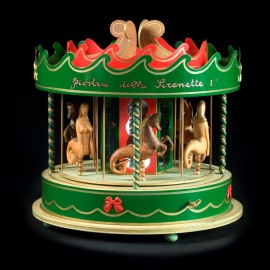